The New South Wales Lowline Promotion Group in conjunction with Barrenjoey Lowline Stud attended the Murrumbateman Field Days held over the weekend of 15 and 16 October 2016. This was the Promotion Groups first field day exposure for 2016 and promises to be the start of a number to come in 2017. 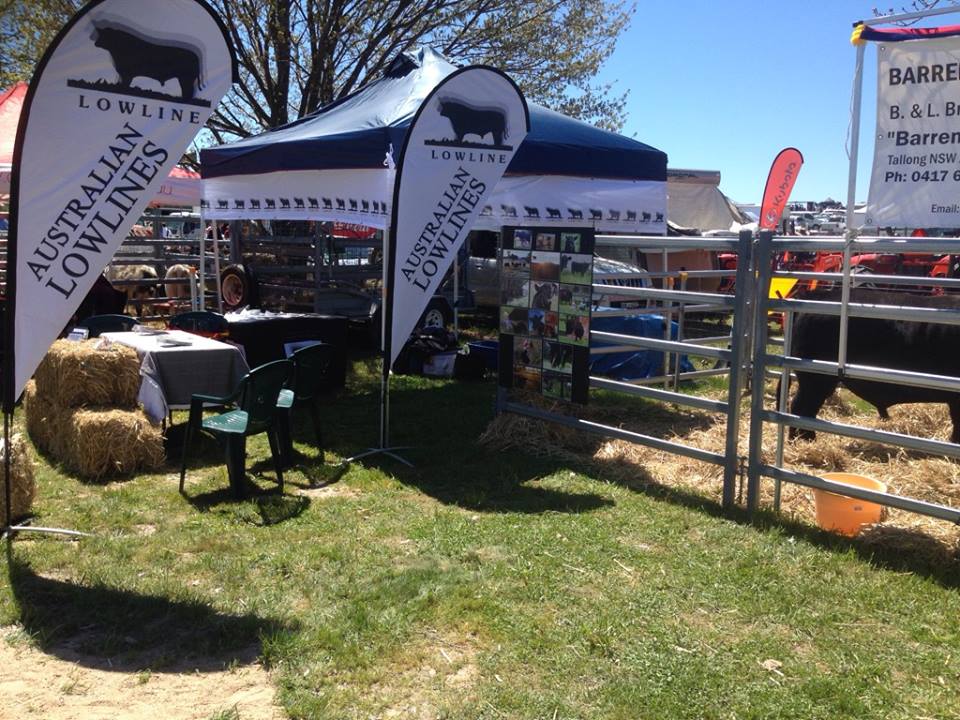 This Field Day is the flagship event for the Yass Valley, which is located approximately 30 kilometres North-West from Canberra. Due to its proximity to the national capital and associated small farm interests, it was considered an ideal platform to promote the Lowline breed. Beautiful sunshine ensured that the event was well attended with just short of 22,000 people coming through the gates to see approximately 500 exhibitors present their wares. Lowlines were one of a number of cattle breeds on display.

Barrenjoey Lowline Stud presented a bull and a cow with calf at foot for inspection of the visitors at the Field Day. The bull, Trungley Tungsten was the 2016 Grand Champion Bull at Sydney Royal. The cow presented, Trungley Pebbles was the 2011 Supreme Champion at the Sydney Royal whilst her bull calf, Barrenjoey Caption Jack shows significant promise for the future. The yarding of these cattle demonstrated the type, quality and nature of the breed that we were there to promote. We can say from the many comments that the cattle were well received, particularly as to their docile nature.

Our Lowline presentation was located on the side of Murrumbateman Oval which provided good exposure to the visiting public as they circulated between the entrance way and the general exhibitors. Being the first cattle exhibit, close to the farmyard nursery, we were inundated by many families with children eager for contact with the cattle. Generally, the comments were on how gentle and docile the cattle were. This demonstrated breed quality was one that appealed to many people of all ages, interested in getting into cattle for the first time.

Bill and Lee Brydon from Barrenjoey Stud manned the Lowline exhibit along with the helpful and knowledgeable assistance of another member of the Promotion Group, Tracey Hall and son Isaac, from O’Hara Lowline Stud. Promotional material in the form of show bags, a photo board, information pamphlets, banners and bunting all helped get our message across. We were indebted to the Victorian Promotional Group for allowing us to use their beautifully presented pamphlets. In addition we provided the public with business cards for many of the NSW and Victorian breeders. It was good to see a number of new and old members of the Association make the effort to drop in to discuss current issues and generally lend their support to the promotion. We hope that many more members will attend these Field days in the future.

The purpose of the Promotions Group in attending the Field Day was to put the Lowline breed out there; to answer the question, what is a Lowline, and why are they the best breed to use. The Promotions Group wanted to put the breed firmly in the minds of those taking the first steps into small scale farming, whilst also inviting those already established in agriculture to make a change to Lowline based on the breed’s commercial and show versatility. The vast bulk of the inquiries seemed to centre on the initial cost of the cattle, the stocking rates per acre compared to the larger breeds, general animal management and registration requirements. Hopefully for many, those questions were answered.  It was comforting that those who had heard of the breed spoke so positively about the cattle.

The final outcome of the Field Day was very positive. For our first larger scale promotion in some time we feel that our goals were achieved. It confirmed the need to be dynamic in a competitive environment. It was also an educative experience for future Field Days on how to better represent the Lowline breed to the appropriate target market. We look forward to conducting a number of field days in the New Year with Murrumbateman a definite return project.

Since the conclusion of the Field Day we have had an inquiry to purchase a number of cattle and some interested members have had their details passed onto the prospective buyer. In addition, a Facebook review of the event has prompted 1600 views from both within Australia and overseas. That was the exact exposure the promotion group was hoping to achieve.