EATING food in the same place it was produced is the very literal “paddock-to-plate” experience soon to be on offer from a Eungella grazing family. Mandy and Kel Tennent, owners of Eungella’s Cloudbreak Lowlines, are now putting the finishing touches on the idea, as the push for agri-tourism across the region gathers momentum.

The couple have already hosted two of the events where visitors are served their lowline beef along with other produce from across the region, at a dining table under a tree in one of their paddocks. 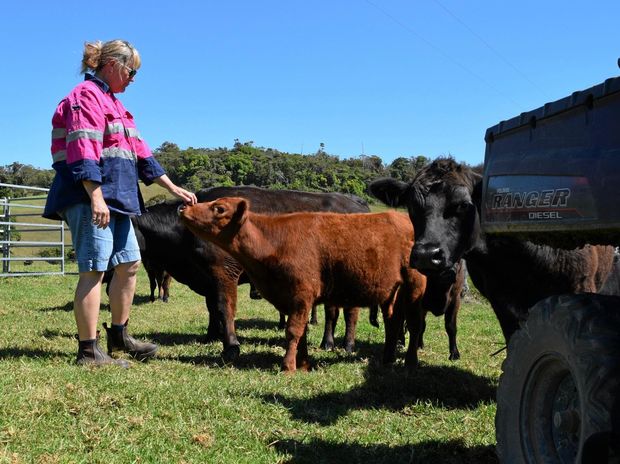 Mandy Tennent with some of their Cloudbreak Lowlines

“Everyone just had this sumptuous feast. There was even wine tasting. Everyone had a great time,” Mrs Tennent said.

While Mackay Regional Council provided the catering for the first event, the second time around the family did the cooking themselves, and Mrs Tennent said “the pressure was on”. “It was totally stressful that one,” she said, with a laugh.
“We did a ploughman’s lunch so bread, oven-baked corn meat with our secret herbs and spices, a cheese, a homemade relish, garden salad.” Local cordial, local honey and local greens were also included.

But Mrs Tennent said one of the highlights was having a pen of breeder cattle for the guests to feed lucerne to nearby. ” It doesn’t get much more paddock to plate than that,” she said.

It was about a decade ago, when researching a type of cattle that would suit their former 10-hectare Emu Park block when the couple first came across lowlines, characterised by their small stature, docile nature and quality beef.

“We just loved them and ended up buying more and more and ended up with too many for the property,” Mrs Tennent said. “Then we thought we want to go bigger than this.”

Mr Tennent had spent part of his childhood at Finch Hatton, and the couple returned to the area to look for a new place, eventually settling on their 87-hectare block 800m above sea level, where they now run Cloudbreak Lowlines.

In the early days they bred a lot of cattle themselves but in order to expand the genetic diversity of their herd, they’ve travelled as far as Melbourne, Brisbane and the Atherton Tablelands to source new bloodlines. As the number of lowlines was relatively small in Queensland, is was important to bring in genetics from far away, to ensure they enhance the genetic pool.

The breed is also DNA traceable, which allows the graziers to secure a premium if they can prove at least 50% of a beast is lowline.

During their time at Eungella, the couple has helped promote the breed, for both its eating quality and suitability for small acreage blocks, plentiful in the Pioneer Valley.

Mrs Tennent said it was their docile nature in particular that made them an ideal choice for people who hadn’t much experience with cattle and were wary of other breeds. “We just love them. They’re docile, they’re easy to handle, they calve easily, plus they are great tasting meat. They’re also naturally polled,” she said. “(Our animals) are the most spoilt cattle there are I think.”

Over the past six years the family has worked to transform the property, through getting rid of weeds, putting in infrastructure and enhancing their soil structure. They’ve even released populations of dung beetles onto the property, which help aerate and breakdown nutrients for the soil.

Once the farm tours launch officially, the family also hoped to be able to spread the word about “the value of food and the value of farmers”. And she believed offering the people to chance to meet the people who produced their food was critical, and visa versa.
“Knowing where your food comes from it’s a big thing. Look at some of the farms overseas and there’s no way you could make money out of the way they farm. In Australia it’s bloody hard.”

“So you work two jobs and you keep it going and hope that some time in the future you’ll get there,” she said.