Every year at the Noorat Carcase Competition in Victoria, the Koallah Farm Eating Quality Award is presented to the best tasting beef in the competition. This year that prestigious award was presented to Jeanette & Peter Stebbins of Ardrossan Lowline Stud at Princetown. 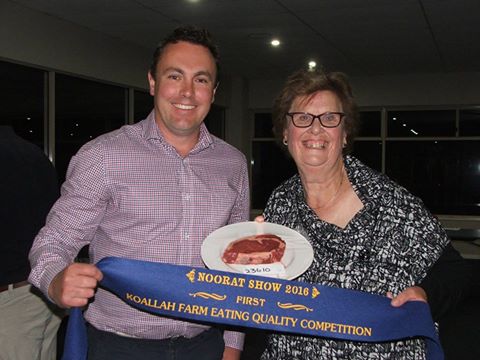 Jeanette explains about the competition -‘ A couple of months ago we decided to enter the Noorat Agricultural Show Taste Competition. This is the only competition of this kind, that I know of in our state of Victoria. The criteria was very open – Beef or Dairy, Steer or Heifer, Any age, Any size.

In September, Peter and I chose a Lowline steer, born late January, 2016, who was still on his mother and was exhibiting great growth rates and looked very “sappy”. We drenched the steer and put the cow and calf in a paddock with plenty of grass and ad lib hay. Four weeks before the steer was to be processed, we weaned the steer, taking the cow away and leaving the steer, with others in the paddock, and offered ad lib grain with 14% protein together with the hay and grass.

At the abattoir, after hanging for 2 weeks, they took 2 Porterhouse steaks from the carcase and took them to the Presentation Dinner last night. One Porterhouse steak from each entrant, was cooked very scientifically using internal temperature gauges, etc. The other raw steak was put on a plate, covered in clear wrap, numbered and presented on a table with an individual piggy bank. Each attendee to the Presentation was given a coin and invited to view the raw steaks and put their coin in the piggy bank relating to the individual steak of their choice.

The cooked steaks were sliced, anonymously numbered and offered to the panel of taste judges for their opinion. The judging panel consisted of a Chef, Vet, Abattoir owner, media celebrity, breeder, Dept. Of Agriculture Agronomist and a young lady (representing Youth).

After naming Third and then Second place, we were shocked, but thrilled to be named the WINNER. 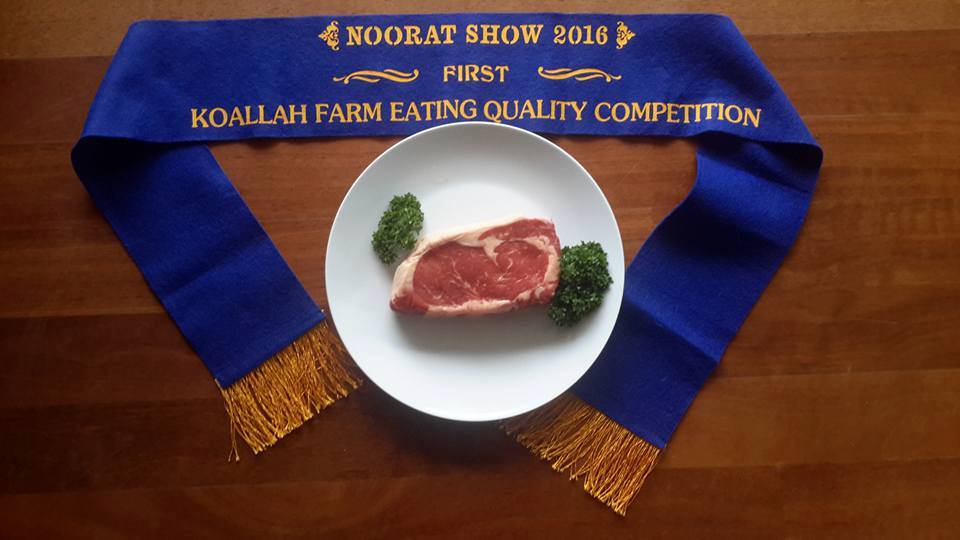 After judging, the judges sat at our table for the meal and discussed the competition, even though they had no knowledge still of what the breeds of the steaks or the owners were.
I gathered from this banter that they were nearly all unanimous with the winner and really liked the taste as well as tenderness and eating ability. They said some steaks had taste but we’re too chewy, some had little taste and some were not very tender.

Our Farm gate beef clients repeatedly tell us they love the taste of our Fullblood lowline beef, although Peter and I have got used to it over the years, but now we have confirmation from “experts” that it is something special.
This steer was sired by our bull Overcast, whose progeny, owned by Cathy Monteith, has recently had success in the Canadian show ring also.’